Lidl Ireland To Close Early This Sunday To 'Thank' Staff

Lidl Ireland has announced it will close its nationwide stores at an earlier time this weekend to 'thank' staff for their 'continued hard work.' The discount retailer took to social media to make t...

Lidl Ireland has announced it will close its nationwide stores at an earlier time this weekend to 'thank' staff for their 'continued hard work.'

The discount retailer took to social media to make the following announcement, 'Please note that our stores will be closing at 8pm this Sunday 17th October.'

'This is to allow us hold a national staff recognition event to say thank you to our amazing teams for their continued hard work!'

The supermarket chain thanked its customers for their understanding via Twitter.

'Thanks for your understanding, we apologise for any inconvenience,' it said. 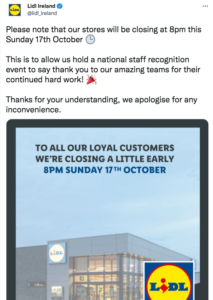 Lidl' stores usually open from 8am-10pm Monday to Saturday and 9am-9pm on Sundays.

Confirming Lidl's plans to close an hour earlier on Sunday a Lidl spokesperson, told Checkout, "As a thank you to our employees for their ongoing commitment and continued hard work we are hosting a national virtual employee event in line with Government guidelines."

"We have facilitated an earlier closing time, so all our employees have the ability to attend," they added.

Lidl Ireland currently employs more than 5,000 people across its operations in Ireland, including its network of 171 stores, Dublin Head Office and three Regional Distribution Centres.

On the 26 January, Lidl Ireland announced that it is planning to recruit more than 1,200 new employees to its Irish operations by the end of this year in a variety of operational and office-based roles across its store network, distribution centres and Dublin head office.

Guinness and Keogh’s have launched a new range of crisp flavours.

The emergence of the new coronavirus Omicron variant is starting to impact shopper behaviour in Britain.