Irish retailer Dunnes Stores has retained its position at the top of the Irish grocery market, according to the latest market share figures from Kantar Worldpanel, for the 12-week period to 28 January...

Irish retailer Dunnes Stores has retained its position at the top of the Irish grocery market, according to the latest market share figures from Kantar Worldpanel, for the 12-week period to 28 January.

“Loyalty continues to define Irish grocery, with shoppers now less likely to shop around and committed to spending more with their retailer of choice," said David Berry, director at Kantar Worldpanel. "Dunnes has capitalised on this trend, successfully counteracting lower footfall with higher spending from its existing customers.”

One retailer on the rise is Iceland, which holds just 0.6% market share in Ireland but is gaining a foothold in the frozen aisle.

“Helped by store openings in 2017 – the retailer opened its twentieth Irish outlet on 23 January – the grocer has managed to increase its share of frozen food sales from 4.3% to 6.0% year on year during the past 12 weeks," David Berry commented.

Elsewhere, the period was notable for a return to form for branded goods, which are up 4% year-on-year.

“The recovery of branded sales began in late 2017 and has continued apace in the new year," said Berry.

"Sales of brands are up 4% year on year as shoppers parted with an additional €49 million on their favourites during the past 12 weeks. This is the first time in four years that brands have posted stronger sales growth than their own label counterparts, with alcohol, baked goods, frozen food and toiletries performing best.” 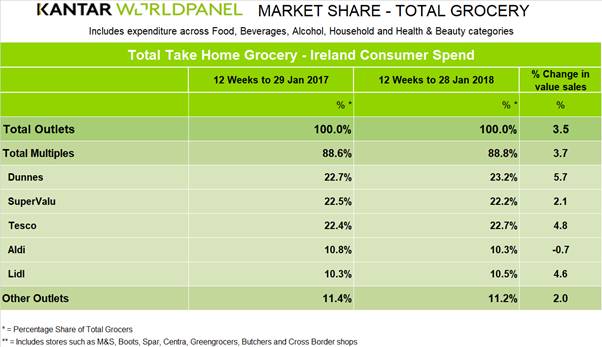 Cognac sales surged by a nearly a third last year.

Aldi Ireland has said that in terms of sales, Christmas 2021 was its best ever.

Lidl Ireland has announced it has submitted a planning application for a second store in Ennis, Co Clare.